Welcome back to Radio Stories from Fallout 4! These posts are my way of appreciating the world-building and storytelling in the modern Fallout games. I’ve already explored the tales broadcasted by towers 0MC-810 and 3SM-U81. This next relay tower is found north of Fort Hagen, so watch out for Rust Devils!

“Anyone out there interested in buying some chems? Come find me. I’m at the three trees with flags. Wait for me there, and I promise you won’t be disappointed. These chems will really take your head off and spin it around. This has been a pre-recorded message. Message repeats in three seconds.”

This one just makes me laugh. He gives about the worst directions to where he is possible, barely contains the bloodthirsty madness in his voice, but damn it, he tried! Also when you find his little hut, which features exactly one (1) chem, a 10 mm, and a baseball bat. Maybe it’s the tone of his voice or maybe I’ve just been playing these games too much, but it sounds like when he said take your head off and spin it around, he more meant shoot your head off and hit a home run with it. 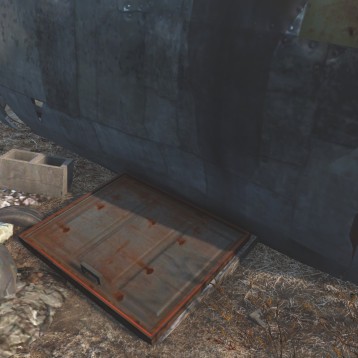 And here we have another poor wastelander trying to survive by holing up, but never coming back out. He’s hiding out in a secret basement of a trailer park that is currently crawling with ghouls. The trailer park itself has an interesting story to it as well. And by interesting I mean kind of twisted. So the guy who actually set up the signal can be found in a surprisingly well-hidden bunker door next to the community swimming pool. As I’m sure you could have predicted, he didn’t quite make it. He seemed to last a while though, considering he’s a regular body and not a skeleton, like some of the people who broadcast these signals. 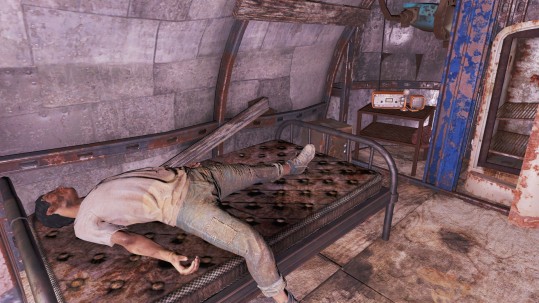 But there is a much more…interesting story that happened at this trailer park. Sprinkled around the trailers are three holotapes called “The New Squirrel” with 3 parts total.  The first two parts are a wholesome tale all about friendship and welcoming others into our families. Ricky the squirrel meets a red squirrel and despite his elder squirrel warnings to not trust this new squirrel, Ricky decides to open his home to the newcomer. Then, in part three, we discover the red squirrel’s true intentions!

Storytime Simon here with the exciting conclusion to “The New Squirrel”. “Tomorrow we can get to know each other and become best friends!” said Ricky to the red squirrel. The red squirrel made a sound that Ricky took for agreement, and the two squirrels curled up to sleep. Later that night, Ricky woke up to the sound of leaves rustling in the oak tree. He looked around. The red squirrel was gone! Ricky surveyed the landscape below and saw a pack of glowing eyes approaching the base of his tree. Cats! Ricky heard a voice from a nearby tree. It was the red squirrel! “I’m sorry.” he said. “They were following me, and I couldn’t bring them to my tree. They would have eaten my family!” As the cats ascended the tree and began to devour Ricky’s friends and family, Ricky reflected on his decisions. His last words were “I really wish I would have trusted my elders.” The End.

Yep. The red squirrel brought a hoard of hungry cats to Ricky’s tree to protect his own family. Ricky learns a valuable lesson about trusting strangers and disobeying elders. What?! What kind of story is that? Especially the fact that the story is told in a relatively cheery voice and in the style of children’s show.

The Fallout wiki has a theory that makes a lot of sense to me about the origins of the New Squirrel. They say the story is telling about “a fictional tale mirroring rumours and reports of Chinese communist infiltrators operating in the United States.” The allegory works like this: “the tree, the one that is the turf of the protagonist brown squirrel, is intended to represent the U.S. The red squirrel’s role is a Chinese infiltrator, and the cats are the People’s Liberation Army.” It’s all about not trusting Chinese people because they could be agents of the PLA. Charming…

I’d like to add to that theory and claim that the skeleton of a man found in a locked trailer belongs to the original Storytime Simon. He’s pretty clearly an ex-military guy, considering his helmet, ammo box, and power armour. My theory is that he survived the bombs dropping and went a little mad in the process. He would have been trained to never, ever trust Chinese nationals and in his mania, this is how he dealt with the trauma.

Despite being a pretty bland signal to follow, this broadcast is in the trickiest of the three to get to. Well, at least if you have Automatron installed and active. This bunker is found at the base of the southwest satellite at the Fort Hagen satellite array which has double-duty as the base of the Rust Devils, the new faction introduced by the DLC. Basically, instead of going into the secret base of the Devils, take a walk to the opposite side of the satellite and hop into the hatch there.

Inside you’ll find…a bunker! This one is a military bunker, so there’s some computer consoles, ammo and storage containers, propaganda posters, and dog tags on the table. Basically, this signal is just your typical warning system put in place to warn civilians of the incoming bombs. I’ll be honest…I think the warning came a bit late. The most interesting part of the bunker to me in the dog tags, since the wording in the message had to have been spoken and not automated, they probably belonged to the man who recorded that message. Why did he leave his nametags behind? Where did he go? Did he survive? Who knows!