Minecraft is one of those games that has never truly run out of steam. Sure, it’s not considered the highest brow of gaming, and it’s mostly young teenagers playing it these days, but to pretend like it isn’t still raking in the money is to be naive. I remember playing the game for hours and hours, building castles and enchanting items and trying to defeat the Ender Dragon. It was so much fun for no good reason. You are given a sandbox with little direction or incentive. Nick always says that of all the games he has played in his life, free to play games not included, Minecraft is the game he has gotten the most value out of his dollars for it. But even the endless possibilities of Minecraft can seem boring and repetitive. So that’s where mods come in!

Nick and I have been spending hours lately playing Minecraft. It seems crazy to think that I’m still having fun with the game, but with the mod packs they have out there, you can turn Minecraft into any kind of game you want it to be. Exploration, tech development, questing, magic, space travel, mods are endless in their genre and scope. So I wanted to write a post about our favourite mod packs to play. We’ve spent hours on each of these and walked away because we spent too much time on them. We use the Twitch desktop application to install and manage these mods and I can’t guarantee that they would be available on other applications.

If you’re remotely in the world of Minecraft mods, you’ve heard of this pack. The premise of this game is all about progression and development. You start the game in the middle of space, standing on a tree, which is planted in a single block of dirt. You have a couple tools in your inventory, but not much. From there, you have to cut down the tree, and then use a sapling to play another. Use the wood to start building an actual platform and eat the apples to keep yourself alive. You can force the tree to grow instantly by crouching next to it repeatedly (or twerking, if you will). Eventually, you can use the leaves and compost them into more dirt. Then you can sieve the dirt and get seeds or rocks. Then you take the rocks and make cobblestone. It goes on and on.

This may sound like it would run out of charm fast. But this mod pack takes you amazing places! By the time we were ready to move on to another pack, we had a nuclear generator, jet packs, chickens that laid diamonds, magical powers, and multiple dragon hearts. We were living in the future! Not to mention the satisfaction of knowing that everything you built came from a single tree and a single block of dirt.

There are some drawbacks, obviously. First of all, there is no actual world beyond what you build yourself. That means no exploration or mining. Also, if you happen to fall off the world, you will die and lose your inventory, like vanilla Minecraft. While you do get a gravestone that holds all your gubs until you reach it again, its located a hundred blocks down from where you spawned and you don’t have much of a way to get it back. There are ways, such as build rope, but it can be a pain. It also becomes much more complicated as you start developing tech, and it went over my head quickly. Nick loved that aspect of it, however.

This pack is literally Stardew Valley but in Minecraft. That’s all there is to say really. You start up the game and you’re prompted to summon someone known as the Harvest Goddess. She’ll teach you the basics of the game, and then give you a blueprint for a carpenter. When you build that, it summons Yulif, a carpenter that’s ready to build his new home and help you continue to build a whole village around you! You get a general store where you can buy seeds. A blacksmith will upgrade and repair your tools. A ranch will sell cattle and sheep to you and a chicken shop sells you…chickens. You get a shipping box to sell your crops and wares. 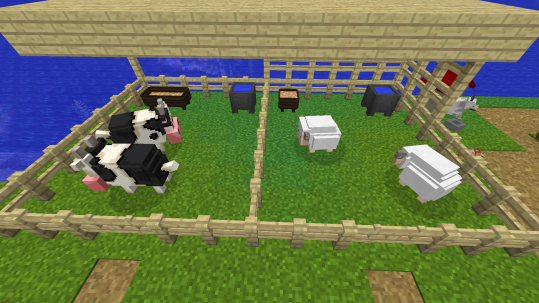 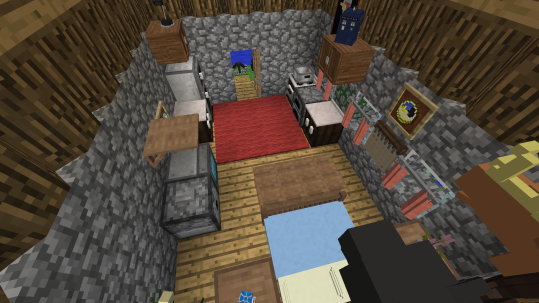 Our lovely home, featuring a full kitchen and events calendar.

I love this mod pack so much. I’ve never actually played Stardew Valley, but not for any reason other than I haven’t gotten around to it. But now I think I have to. It’s so pure and simple, just building a simple village and becoming a simple farmer. There is a huge world to explore, quests to complete, and special dungeons to plunder. I have a whole farm with a half dozen chickens, a couple cows, and a couple sheep. Nick is loving the farming, growing thousands of dollars of crops in a day. There’s also a mine you can go and collect gems and ores. You also learn to cook with a functional refrigerator, oven, food mixer, and kitchen counter. You can use your own crops to cook full meals! There is just so much to do that I love and it feels so wholesome.

This one is totally different than the ones I’ve mentioned before. This is a mod pack designed specifically to be played in Peaceful mode. That means no mean mobs trying to kill you, no worrying while going mining, and even the Nether is a walk in the park. This is the mod pack that I play without Nick. While he loves challenge and technology, I prefer a more laid back and relaxing experience. Basically, I’d rather play without inconveniences, like the enemies and other mechanics. I just want to enjoy the time, not look over my shoulder every second.

It’s also a quest based mod with some small technology and magical progression. Nothing too crazy, but it’s fun to achieve more and more as time goes on. It’s also a pack that rewards travel and exploration. The villages have windmills and much more realistic houses, not the usual 2×2 shacks. There are castles, temples, half-collapsed houses, and deep pits of dungeons. Admittedly, this exploration isn’t as high stakes as it would be if the dozens of spawners in the dungeons were functioning, but still. I’d rather meander around and look at everything that feels like I have to flee the moment I get inside. 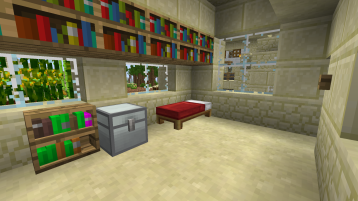 My simple home, I barely use the bed.

The bulk of my base, all outside because I can work through the night without fear. 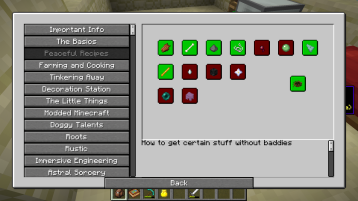 Here is how the game helps you get the items that are normally only dropped from mobs.

So far, these are the packs that have been taken the most of my time. We’ve dabbled in a couple other packs, like Tolkiencraft and Sprout. They were okay but had some glaring problems or glitches that ruined the experience for Nick and/or myself. If any of you have a recommendation for a Minecraft mod pack that you’re loving, please tell me all about it! Like I said, these packs may have the possibility of infinite play, they grow old and only have so much progression.