This week, March 4-10, is No More Week. This is a campaign by the initiative No More, which is an organization dedicated to stopping domestic, sexual, and all kinds of violence against women. Their name No More is in reference to changing the world and making it so no more women are abused, no more people become abusers, and no more lives are ruined by violence. No More Week is an annual event that they have to spread awareness around and hold events to raise funds. I learned about this and decided I wanted to write about it and try to bring attention to this important cause.

I feel like the biggest problem that stops the progress of this change is that people don’t know how to help. I know that I’ve felt many times that I don’t have the money or the time to really make a difference. It can be discouraging, and feels a lot easier and more efficient to let other people take care of it. But what I’ve learned is that sometimes it’s the tiniest of changes that really make the difference. You don’t need to start a charity or quit your job to volunteer 24/7. All you need to do an try your best to make a difference in your life and the culture you allow to exist around you. And here are ways to do it. 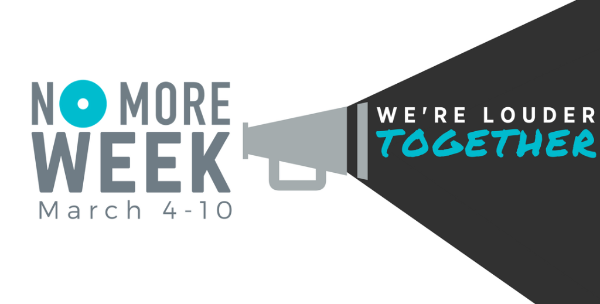 Speak up when someone says something inappropriate

So often when the people you care about say something that crosses a line, we just ignore it. It’s easier to shrug it off and pretend like you didn’t hear it. No one wants to be that person who just can’t take a joke. But it’s exactly that attitude that makes it okay for people to continue to make jokes about serious issues and make light of violence. And standing up against your friends or family doesn’t have to be a huge drama.

You don’t need to flip a table or yell and curse at them. Honestly, the first and possibly only thing you have to do is not laugh. Even a laugh while you’re shaking your head or saying “oh you’re terrible,” in a playful way is still encouragement. They probably know that what they said was controversial or risky, but laughing at it in anyway tells them that it’s okay to say those things in front of you. So you have to not laugh, or try to stop laughing.

Work on removing some language from your vocabulary

Not only is speaking out to others important, but you should also try to take a look at how you speak. The hardest thing for me was to change my vocabulary. The type of language that perpetuates violence, inaction, and gender inequality is so common in our society. Saying such simple things like “be a man” or “she’s so easy” reinforce the ideas that men should be violent and women should be careful. You may not necessarily agree with the underlying sentiments or mean to say them, but when you use those phrases you are telling the abusers or possible abusers around you that you support those mentalities. Sending that message won’t make them scared of committing those actions.

Many people don’t realize that what they say can have bigger consequences. I hear people all the time say that they’re just words and words can’t hurt you. I think we’ve all heard the childhood rhyme: sticks and stones can break your bones, but words can never hurt me! But what people don’t want to think about is how it is words that make people throw those sticks and stones. The way that we speak leads to the way we think, and influences the way that others think. The way the we think ultimately controls the way we act. If we think of rape or domestic abuse as a joke, then the act of doing won’t feel as serious or damaging.

Emphasize consent in all parts of life

Some people think that the word consent is only about sex and is just a restraint to having a good or free sexual life. Well there are a million problems with that mentality. First of all, consent is the only way to have a sex life. Sex without consent stops being sex entirely and becomes an act of violence, completely separate from love or desire. But the bigger issue is the idea that consent is a sexual concept. In reality, consent is something that we learn in all facets of our life and we just apply it to sex after learning it elsewhere. It’s important to make sure that the people around you know that you will respect their consent, whether it’s a sexual advance or it’s a invitation to get ice cream.

Try to make “is that what you want?” to become common in your vocabulary. Always be asking both yourself and other people if they are doing what they want and saying it when it’s something they don’t want.  Obviously you don’t have to be patronizing to others. They are probably smart, independent people, but even the smartest and most independent people can sometimes they feel pressured. That’s why it is important to let people know that their consent is powerful and should be valued. By everyone.

I think this is most important to instill in children as young as possible. There are so many situations we put children in that violates their consent or teaches them that it’s not as important as someone else’s needs. One example would be when we make children hug or kiss relatives. It seems like such a small thing. Kids can just be difficult, so they need to be made to show the amount of affection they should. That is honestly disturbing when you think about it like that, though. This is one of the first lessons kids have in saying no, but then their no is not taken seriously and the older relative’s need for affection is put first. Even sharing toys on the playground can teach these lessons. I’m absolutely not saying that you shouldn’t teach your child to share, but you should also teach them ownership and permission. If they bring a toy that belongs to them to school, it’s up to them who plays with it. If another child brings a toy to school, then it is up to that child who plays with it. Teaching boundaries and that their own permission is important is a lesson they will take with them into adulthood.

Our culture may be safer than in the past, but it’s still full of violence and ideologies that encourage it. We may not be able to change this overnight, but we can be a light in the darkness. We can try to be positive reinforcements, change how we look at the world, and encourage others to be better. Change has to start somewhere, and it can start with you.