If you play any mobile games, chances are that you play a free-to-play game. They are huge right now, and it’s becoming almost impossible to find any apps that are completely free these days! Now, I like to take a more optimistic approach to this trend. If it wasn’t for free-to-play games with micro-transactions, then we would have to pay for all of those games we love to play so much. Sure, it can be annoying if exclusive content is hidden behind a paywall or other players can purchase better gear than you with real money. But I honestly don’t think that most of the more popular mobile games would exist if they couldn’t make money in that way.

On the other hand, many games leave certain loopholes for the players to use and get access to somethings that are intended to be paid for. Many of you would be familiar with the offer of premium currency or items in a game in exchange for you sharing the game on Facebook or inviting your friends to play too. Some games also offer ad views in exchange for those things. And I have a couple more tricks to make the absolute most out of these games, without spending any money.

On of my favourite ways to access exclusive stuff in games is by using Facebook. So often games will offer a reward for sharing your profile, game progress, or other achievements in the game itself. They do it for word-of-mouth advertising, hoping that if people see your post about the game, your friends might try it too. It’s a bit cheap, to be honest, since 99% of the time the “recommendation” isn’t genuine and was just done for the reason I’m writing about. So, you want some free diamonds or gold coins or whatever, but you also don’t want to mar your Facebook profile with a game you only minimally care about. What do you do?

Well, there is a way to share a post to Facebook invisibly. You can do this with privacy settings. When you share something to Facebook through an app, you’re given most of the same options you’re given if you were sharing straight from the site. This includes who can see the posts you make! All you need to do is change that setting to “Only Me.” Then, you will technically be posting it, but no one else is the wiser (or more annoyed).

This method also only applies if the game opens the sharing option in the app itself. If it switched from itself to Facebook app itself, chances are you can simply go back to the game and it will assume since you clicked through to share, then you shared it. It can’t know what you post to your Facebook if it’s posted from the Facebook app.

Rate on the App Store

This one is very similar to when the game opens up Facebook for you to share to it. If you want to get the prize behind a positive review on the App Store, just agree to do it. Once the App Store opens, you can immediately close it and return to the app. The game has no way of knowing whether you made the review or not. This still works even if they made a specific request like it being 5 stars.

I would like to mention that if you truly like an app, just leave the review. You can just write one or two words and it helps the app get more downloads. I just find that these games go straight to asking for 5 stars when you’ve been playing the game for 10 minutes and don’t know whether it’s worth that or not yet. I also find that if you choose “remind me later,” they will indeed remind you later, over and over until the end of time. Just tapping yes to review makes those friendly reminders go away (usually). 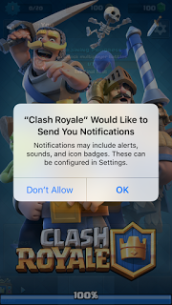 Another thing that games love to poke you about is allowing them to send you notifications. It’s through those that they try to get you back to their app, where you will hopefully see ads or buy in-app purchases. Personally, I really don’t need to know the exact second that my lives in Candy Crush refilled. I’ll play the game when I want to play the game. But some games aren’t satisfied with that and want you to enable notifications. This is a less common problem, but sometimes the game will continually ask you every time you open the app to please allow notifications. So, do it. Give the permissions…for now.

Then just go into your settings and rescind those privileges. As far as I’ve been able to tell, the app doesn’t know whether you’ve done it from the settings later, only if you’ve clicked on the allow pop-up while in their app. So if you do this method, they think you still have notifications popping up and you don’t need to press “maybe later” 30 times a day.

And that’s how you exploit a system! Let me know if you used these tips, and all the delicious in-game currency you won. I want to mention again that if you have been playing a game for a while and really enjoy it, I highly recommend supporting that developer by leaving a review or spending some money on their in-app purchases. I usually use these tips for when I want to postpone doing those things or don’t know whether that game will be worth my time or money. Anyways, hope that helped and later days!