This February I had the amazing opportunity to visit the Universal Orlando Resort with my “boyfriend” (more on that later) and his family. We mostly went for the Wizarding World of Harry Potter because I’m such a huge nerd, but we also went to all the other parts of the parks as well. So here is a quick run down of our week in Florida!

So as I mentioned, the star of the show for us was The Wizarding World of Harry Potter. That is the very first thing we went to see when we landed. I absolutely love all things Harry Potter and I have since I first picked up the books years ago. It’s these books that got in me into reading at all! I remember years ago when the adverts for the park were coming out, I would just cry because I knew that it would be many years until I would be able to go, if at all. And now I’ve done it, and it’s everything I could have dreamed. One of the biggest and most surprising parts, was the dragon perched on top of Gringotts that actually breathed fire! Here is the video I took of the blaze.

There are a couple rides in the Harry Potter sections of the parks. One is Harry Potter and the Forbidden Journey, which is in Islands of Adventures. This is the one going through Hogwarts, starting wtih Harry, Heromine and Ron sneaking you out of History of Magic class. I won’t spoil it, but there are many magical creatures, characters, and locations featured. Now, I am not a roller coaster person. I hate going upside down or too high or too fast. But all of these rides were perfect. The Forbidden Journey went upside down for about a second, and it never got too fast for me. There is a lot of simulated action. It also has a lot of cool stuff to look at in the line on your way to the ride to keep you occupied if the line is slow. Here is some of those things! 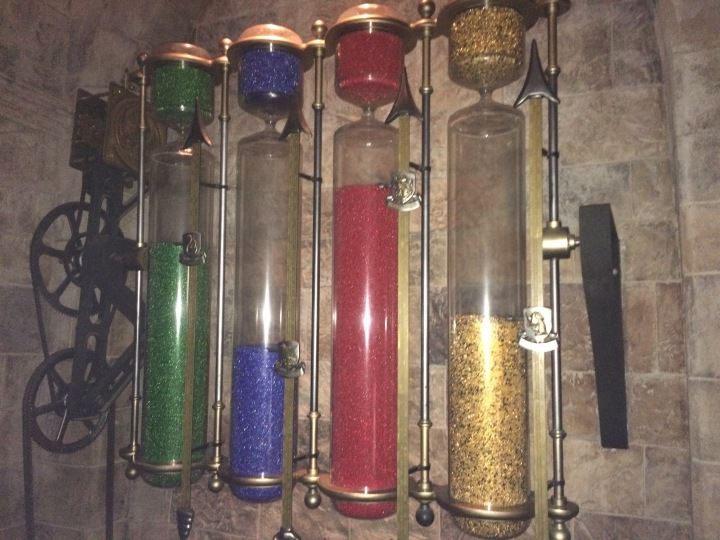 Entrance to Dumbledore’s offce…but we took the long way around. 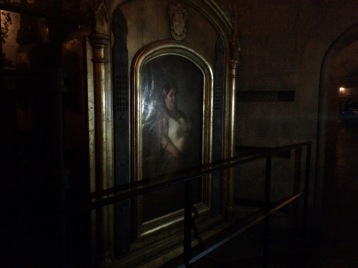 Door to the Gryffindor common room

Sorting hat told us all about the safety rules

At the other park, there is Harry Potter and the Escape from Gringotts. This ride is the theme park’s homage to the scene in the Deathly Hallows where the golden trio break into Gringott’s to steal a horcrux from Bellatrix’s vault. It also features a lot of simulated action. I was even less intense than the Forbidden Journey, since the carts didn’t even have shoulder restraints. The line for that also features several interesting settings. 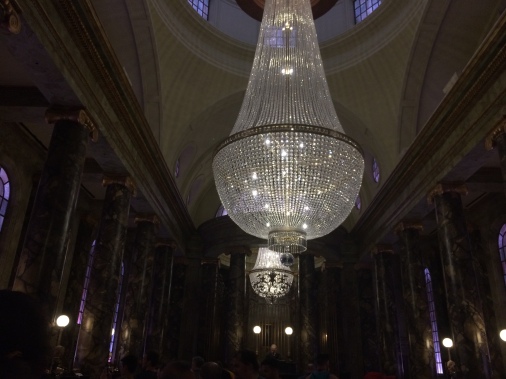 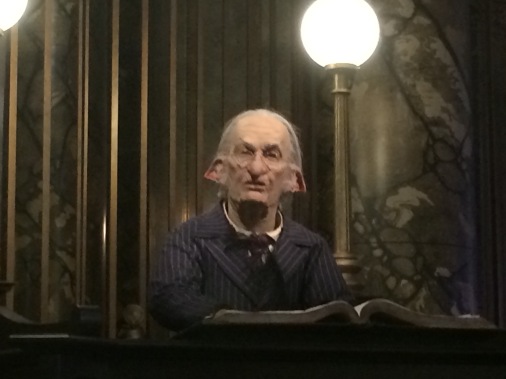 The other rides were the Dragon Challenge, where you can ride either the red Chinese Fireball or the blue Hungarian Horntail, and the Flight of the Hippogriff which is your chance to ride Hagrid’s wicker training hippogriff. They were basically just normal roller coasters. I only went on the Flight of the Hippogriff because the Dragon Challenge went upside and I just can’t do upside down. However both featured interesting sights in the line. The walk to the Dragon Challenge featured real props from The Goblet of Fire, including the goblet itself and the Triwizard Cup.

The walk to The Flight of the Hippogriff mostly just features Hagrid’s hut, from which you could hear Fang barking hello.

Another very magical part was riding the Hogwarts Express between the two parks. It was almost a ride itself, with a little video playing in the window while you ride, making it look like you’re really driving through London and the countryside to get to Hogwarts. The train stations were also very immersive, with King’s Cross station on one side and Hogsmeade station on the other. You even walk through the wall to get onto Platform 9 3/4. Here is a video of me walking through. While you’re walking through, you don’t see anything but a regular hallway, but from this angle you can watch other people walk right through the brick.

Advertisement from the movie

Ready to head off to school

Hagrid waiting to ride to Hogwarts

We ate at the Leaky Cauldron and the Three Broomsticks, got ice cream at Florean Fortescue’s Ice Cream Parlour, and bought wands at Ollivander’s. We then used those wands to cast spells at the interactive store displays. You actually waved your wand and things would actual move and react to the magic! Here are some more miscellaneous photos from our time there.

And then something very special happened, right next to Hogwarts: Nick proposed to me! Yep, he asked me to marry him and I said yes yes yes! He knew that this is the most special place for a couple of nerds like us to get engaged. It was also on Valentine’s Day, so after getting some dinner and wine just the two of us, we went for a walk through Hogsmeade to see the castle at night. He got down on one knee and everything. Here are a couple pictures from that night.

We also did the rest of the parks pretty completely since we were there for a whole week. Spiderman, Despicable Me, Men in Black, E.T., King Kong, and even the Cat in the Hat were all ridden. Nick and Lisa also rode some of the more intense rides like the Hollywood Rip Ride Rockit and Incredible Hulk. We also spent some time in Krustyland, and even got a Krusty burger for lunch. Another day we spent doing the water rides at Toon Lagoon and Jurassic park. It was honestly a really amazing trip. I’ve grateful we were able to go for a whole week, because it gave us a ton of time to explore the parks at our own pace. 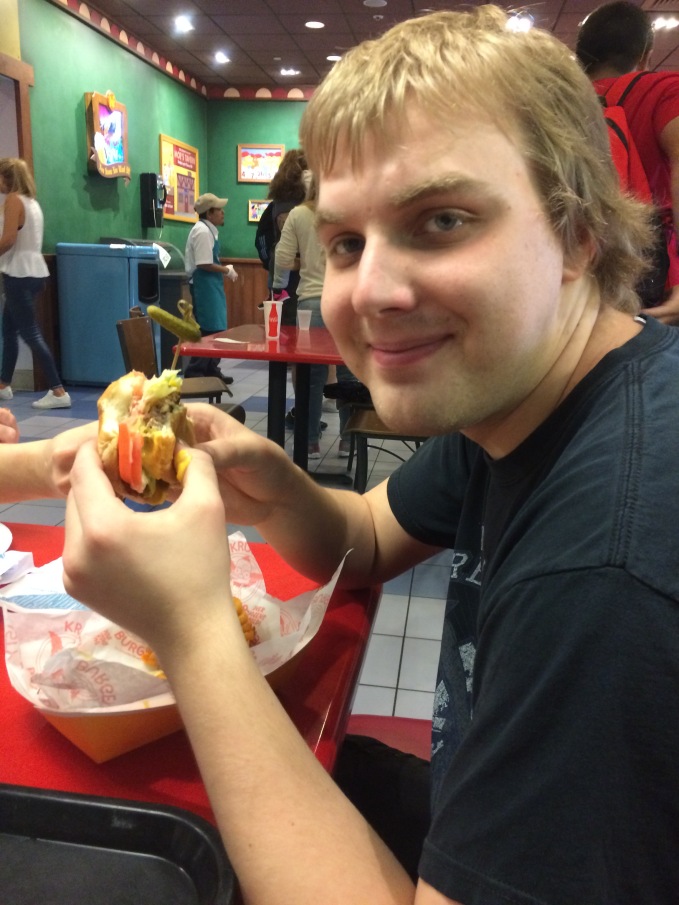 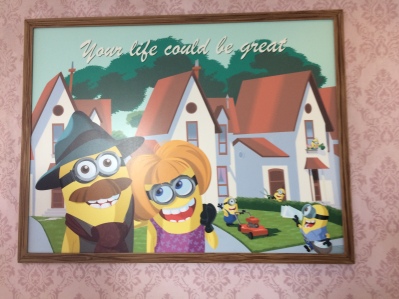 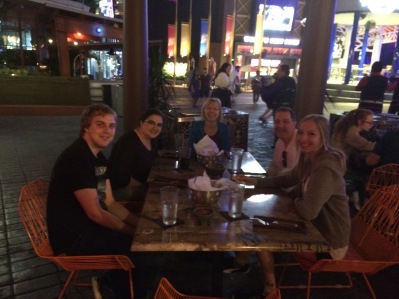